Bear Grease: How to Render Fat

Bear grease is a wonderful thing. Anyone who knows me knows my enthusiasm for evangelizing this all natural, all free product.

In Camp Cookery, Horace Kephart says, "All of the caul fat [of a bear] should be saved for rendering into bear's oil, which is much better and wholesomer than lard." Made right, it has almost no flavor.

It's favored for pastries. It's a superb oil for frying. It's an outstanding conditioner for gun steel, leather and wood.

Eastern Woodland Indian tribes rubbed bear grease into the backs of their bows to seal out the elements.

It's even been used to reliably predict the weather.

Bear grease is also an excellent supplement to critter food. We give it, in addition to raw venison, to all of our cats and dogs.

So I said bear fat was "free." I don't hunt bears and, even so, hunting is far from free.

Every year I put in a call to a local game processor friend for any refuse bear fat.

He usually gets at least one bear that has enough fat to save for me. It's normally 10 or 15 pounds, which gives us enough bear grease to last the year.

It helps us and it also keeps him from paying to drop it in a landfill. And it saves a precious resource from being wasted.

I love knowing that I can glean something like that and put it to good use as a healthy food.

There are a few ways to make bear grease or render lard.

It's a simple process. It's also simple to screw up. I've learned, through trial, error, wasted fat and precious time, what works and what works better.

If you follow these fundamentals, you'll get something useable:

1) cut away all meat from fat - if any meat is left, it will cook unwanted flavors into the bear grease

4) DO NOT OVERCOOK - or, really, don't cook. All you want to do is melt the fat to separate solids from oils. This requires moderate heat over the course of a couple of hours or so (or more). Less heat is preferable to less time. If it smokes, it's too hot. Scorching or burning makes it taste like fried meat. Medium heat on a modern stove works well.

5) If you're single, render your fat inside. If not, ALWAYS do it outside or face the wrath of your partner for stinking up the house.

Dry Fat Rendering: This method calls for heating fat with no water added.

The first time I ever rendered bear fat, this is what I tried.

I really had no idea what I was doing. I just cut the fat up into a bunch of huge chunks, put it all in a cast iron pot and let it simmer on my wood stove. For days.

Surprisingly, it worked fairly well, although it was too strong for Cindy's taste.

Slow heat and cast iron was the saving grace, but I would never recommend it. It's really easy to over-heat and ruin your project and you really need to stir it a good bit until enough of the fat has been liquified to prevent it from burning.

Lard or bear grease made this way usually takes on a stronger flavor which works OK for general cooking oil but you wouldn't want it in anything that might take on the flavor, like pastry.

I still have a hard time convincing Cindy to use bear grease for more than a few things because she remembers the first batch.

Wet rendering is the way to go.

Semi-Wet Fat Rendering: You only use a little water - maybe an eighth of an inch in the bottom of your pot.

The funcion of the water here is to ease the fat into heat. By the end of rendering the water cooks off.

It's much easier to avoid scorching the fat when it's heated in water. This method is very similar to dry rendering and will result in a similar product.

Wet Fat Rendering: This is probably the safest way to make lard or bear grease.

You use one part water to one part fat. When you're finished melting the fat, carefully remove it from the water.

Any water left in your stored lard will make it spoil more quickly. This method will give you the most desirable and mildest flavored grease or lard.

I now only use a crock pot or slow cooker when I render fat. It's cheap insurance for keeping the fat from scorching and ruining the grease.

You can just throw in your fat, turn it on and walk away until it's ready for another batch. Keep it on low and your fat should be safe. 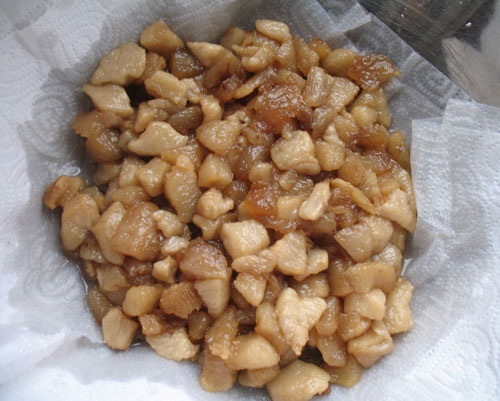 After you've rendered most of the fat, you'll be left with a mixture of cracklings and some unmelted fat.

You can keep heating to melt the rest, but it's not really worth the time or energy for what little return you'll get.

To store your rendered lard, strain out the cracklings, which you can eat or mix into cornbread, by pouring it through a funnel lined with several layers of cheesecloth or a paper towel.

For maximum storage time, freeze in clean jars, or keep it in the fridge.