Jerusalem artichoke (Helianthus tuberosus), or sunchoke, is a wild sunflower native to the central United States. Sunchokes grow up to 12 feet tall.

The leaves may be up to three inches wide and eight inches long, while the yellow flowers, occurring in August and September, are generally between one and a half and three inches in diameter.

The tubers of jerusalem artichoke have been used as food by Native Americans since before the arrival of Europeans. They have been planted throughout much of the U.S. and Europe and are generally considered invasive.

Unlike most root vegetables, the carbohydrates in sunchokes consist mainly of inulin instead of starch. The inulin is converted to fructose after several frosts making it more easily digestible by humans and safer for diabetics. 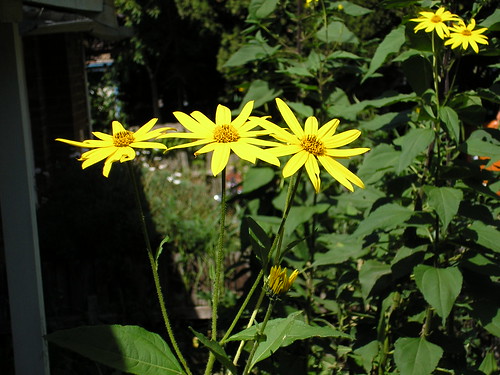 csView on Flickr
14 years ago ago by Paul Fenwick.

Originally use by American Indians as food, sunchokes have more recently been planted in Europe to use in making wine, beer and liquor in addition to food for people and livestock.

It's best to leave jerusalem artichokes in the ground until ready to use. They'll keep in a paper bag in the the crisper drawer of the fridge for a week or two but bruised or cut tubers won't store for long.

Sunchokes may be eaten raw, pickled, made into flour or prepared like potatoes.

Most root development occurs after flowering and before frost. It's best to leave jerusalem artichokes in the ground through several frosts to ensure the inulins have converted to fructose.

To harvest, mark plants while flowering and use a spade or shovel to dig roots after the stalks have died back.